“PROVIDING ADDITIONAL QUALIFICATIONS FOR ROMA WOMEN, AND LAYING FOUNDATION FOR THEIR ENGAGEMENT IN SOCIAL ENTERPRISE- BEAUTY SALON IN SHUTO ORIZARI” 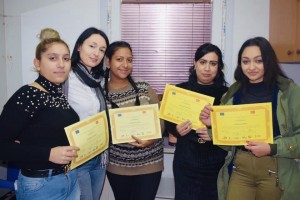 10 Roma women who have already finished formal education, or without completed education, that don’t have possibilities and funds for further improvement of their skills and knowledge.

The main goal of the project: Improvement of the social status of the young Roma women and strengthening the possibilities of being more competitive on the labor market, according their possibilities. The target group: 10 Roma women who have already finished formal education, or without completed education, that don’t have possibilities and funds for further improvement of their skills and knowledge.  Activities: Three kinds of trainings were provided for the project participants (training for hairdressers, make-up and manicure services), depending on participants interest and possibilities. Due to the high interest for the trainings, total of 15 women were included in the trainings, instead of 10 that was previously planned in the project proposal. After the training the participants had an opportunity for a practical work in the beauty salon “ROMNI” that was equipped for the project activities, as well as in renowned hairdressers’ saloons in Skopje. After completing the training and the practical work, the best 3 participants got opportunity to be engaged in providing services as mobile team. In the future they could transfer their work and customers to the equipped salon as well. The remaining participants in the project, who were interested, were advised and assisted in finding salons where they could have internship or be hired. Marketing campaign on social media

A video campaign consisting of 4 short promotional videos (testimonial; presentation of the mobile team; presentation of the services of Saloon Romni; short commercial for Saloon Romni) was promoted on social media. The campaign made a contribution in increasing awareness among wider population in Shuto Orizari about social entrepreneurship. This concept was unfamiliar among this population in the past, and during the realization of the project, with our regular posting about project activities (trainings, practical work, services provided by the mobile team) as well as the promotional videos, the concept of social entrepreneurship was introduced to this population and they became more aware of its benefits.

This website uses cookies to improve your experience while you navigate through the website. Out of these, the cookies that are categorized as necessary are stored on your browser as they are essential for the working of basic functionalities of the website. We also use third-party cookies that help us analyze and understand how you use this website. These cookies will be stored in your browser only with your consent. You also have the option to opt-out of these cookies. But opting out of some of these cookies may affect your browsing experience.
Necessary Always Enabled
Necessary cookies are absolutely essential for the website to function properly. These cookies ensure basic functionalities and security features of the website, anonymously.
Functional
Functional cookies help to perform certain functionalities like sharing the content of the website on social media platforms, collect feedbacks, and other third-party features.
Performance
Performance cookies are used to understand and analyze the key performance indexes of the website which helps in delivering a better user experience for the visitors.
Analytics
Analytical cookies are used to understand how visitors interact with the website. These cookies help provide information on metrics the number of visitors, bounce rate, traffic source, etc.
Advertisement
Advertisement cookies are used to provide visitors with relevant ads and marketing campaigns. These cookies track visitors across websites and collect information to provide customized ads.
Others
Other uncategorized cookies are those that are being analyzed and have not been classified into a category as yet.
SAVE & ACCEPT